Psychiatric care has historically focused on helping control a patient’s mental health symptoms and helping them find solutions. Today, using an emerging approach referred to as trauma-informed care, or TIC, our behavioral health providers recognize even more powerfully how an individual’s history of trauma can impact their health, relationships and ability to adopt healthy behaviors. This fits with our mission to address the root causes of illness and empower patients and engage them actively in their care and choices.

According to the Trauma-Informed Care Implementation Resource Center, the impact of trauma on health is significant. For providers, TIC emphasizes the need to recognize when an individual may be affected by trauma and understand that trauma likely affects the majority of patients seeking help.

In behavioral health practice, reintroducing trauma by mimicking it and role playing in order to address it — such as through the use of aggressive speech and physical force — leads to an adverse reaction from patients and can trigger their trauma. Establishing safety for both the patient and health care provider is extremely important. TIC stresses the importance of customizing a sensitive approach for each patient.

Providers report that using TIC leads to an improvement in patients’ care experiences and clinical outcomes. It leads providers to be attuned to and aware of a patient’s life experiences beyond the surface level and helps them be more empathetic caregivers.

“TIC is the future,” said R. John Repique, D.N.P., R.N., NEA-BC, UF Health Shand’s Psychiatric Hospital director of psychiatric nursing. “Through this form of care, an environment is being created that moves away from “contain and control” to a more healing environment. This allows patients to have control of their own treatment in partnership with their health care providers.”

The approach is also designed to decrease anxiety, helping patients find the path to get to the end of the road, he said. They are happier with a more personal and patient-focused treatment plan that helps them feel more confident and receptive to treatment.

“When we provide our patients with choices in their treatments based on safe options, it empowers the patients and allows them to feel like they’re in control of their services and decision-making,” said Joseph Munson, Ph.D., LMHC, N.C.C., UF Health Shand’s Psychiatric Hospital clinical services director.

“We used to ask patients, ‘What is wrong with you?’” he explained. “Now we say, ‘What happened to you and how can I help?’ This language doesn’t blame the patient. It actually depersonalizes the issue. We are destigmatizing the situation; we are removing the label from the person. We are saying your depression is really holding you down versus you are the depression.”

Providers cannot assume that at face value they understand what a patient is experiencing. Faculty and staff should recognize that patients’ past experiences dictate their current behaviors, decisions and mindset. It’s the responsibility of providers to dig deeper and approach each situation with compassion, empathy and a desire to understand and support the patient.

TIC helps providers establish a greater sense of safety for patients with a history of trauma to help them prevent more serious consequences of traumatic stress in the future.

In July, The Joint Commission implemented a revised National Patient Safety Goal focused on reducing the risk for suicide for hospitals and behavioral health care organizations. It has several elements of performance, one of which addresses suicide screening using an evidence-based tool. It outlines standardized precautions for patients who are screened positive for suicide risk, including the need for one-on-one continuous monitoring and identifying and removing “ligature risk” factors in the immediate environment (items that may help someone carry out self-harm practices). The majority of inpatient suicides result from hanging.

“Because of the changes made in July, every hospital patient is now being screened for suicide risk,” Repique said. “Now we are identifying those patients that we may not have caught before as being at risk, and we have more patients coming to us for psychiatric treatment. More patients are now able to access the services they need.”

This is an important change in health care, as suicide is a growing public health issue. Suicide is the 10th-leading cause of death in the U.S.

A patient’s history of a prior suicide attempt is the best-known predictor for future suicidal behaviors.

“We need to identify history and risk for suicide to be able to provide help and resources, even after discharge,” said Elaine Delvo-Favre, D.N.P., M.S.N., UF Health Shand’s Nursing and Patient Services administrative director for nursing quality and regulatory standards.

UF Health uses the Columbia Protocol, also known as the Columbia-Suicide Severity Rating Scale, or C-SSRS, for suicide risk assessment through a series of simple, plain-language questions that anyone can ask a patient. Responses help users identify a risk for suicide, assess the severity and immediacy of that risk and gauge the level of support that the person needs.

Suicide screenings are required on all patient admissions to our UF Health hospitals, our hospital based E.R.s and freestanding emergency centers, and the UF Health Florida Recovery Center. Regular screenings during a patient’s stay and prior to discharge help providers understand their thoughts and safety.

“The key is to help the patient being assessed look at their protective factors,” said Roxane Harcourt, LCSW, LMFT, UF Health Shands Psychiatric Hospital administrator. “What can we do to get them on the living side?”

“We’ve implemented a wellness plan so they know they’re not alone and it provides them options they may not have known were available to them, such as a list with phone numbers for their best friend or a suicide prevention hotline. That way they know someone will be available to talk to them.”

Suicide prevention is not solely about screening and requires a comprehensive focus.

Delvo added, “It is our responsibility to identify patients who are at risk of hurting themselves and at the same time ensure that we provide a safe environment for them to heal.”

THE IMPACT OF ADVERSE CHILDHOOD EXPERIENCES

The Adverse Childhood Experiences, or ACEs, Study highlights that the more frequently an individual is exposed to a variety of stressful and potentially traumatic experiences between infancy and age 18, the greater their risk for chronic health conditions and health-risk behaviors later in life.

According to the Centers for Disease Control and Prevention, the ACE Pyramid represents the conceptual framework for the ACE Study, which uncovered how ACEs are strongly related to development of risk factors for disease and of well-being throughout a person’s life.

“Any adverse event increases an individual’s ACE score and changes our biology in a way,” Munson said. “Data shows medical and psychiatric conditions can come out of those changes to the brain because of ACEs. Traumainformed care shows us we can’t treat behavior based on the surface appearance.”

Although hospitals are focused on safety, the CDC has noted a rise in workplace violence, with the greatest increases of violent events occurring against providers. We need more intensive deescalation training and awareness as the first-line response to potential violence and aggression in health care settings.

A three-year study in the American Journal of Nursing noted that 25% of nurses reported being assaulted by patients or patients’ family members.

At the UF Health Shands Psychiatric Hospital, our standardized de-escalation training model is dubbed “Handle with Care.” This model teaches staff how to handle disruptive and aggressive situations, emphasizing verbal de-escalation to reduce tension and create a calm and safe environment for everyone involved.

“With the ‘Handle with Care’ model, we downplay the physical aspect of de-escalation, putting the focus on how to talk to patients,” Repique said of the verbal versus physical tactics.

“WITH THE ‘HANDLE WITH CARE’ MODEL, WE DOWNPLAY THE PHYSICAL ASPECT OF DE-ESCALATION, PUTTING THE FOCUS ON HOW TO TALK TO PATIENTS."
R. John Repique, D.N.P., R.N., NEA-BC

A recent situation involving an aggressive patient at the psychiatric hospital led to a nurse stepping in to sit down with a patient and tell them, “You are here with me. You are safe.” This action immediately defused the tension.

“That situation was an example of how we have to slow down, we have to take the time and show we care,” Harcourt said. “We’re instilling hope that whatever is going on in that moment, we will help you, you’re not alone.”

In doing so, the nurse created a calm, safe and compassionate environment in which the patient could relax and avoid physical harm.

Munson added, “As health care providers, we are not operating out of fear, but compassion. Compassion can always be felt — even by the aggressor — and that’s the model to operate on.”

What they do carry with them when they patrol our UF Health Shands properties is their training and skills. They have expertise in safety techniques without the aid of tools. Their most useful defense is special training to de-escalate potentially hostile or violent events. Knowing when to intervene before an intense situation escalates is a significant ability.

Security officers are often dispatched to nursing units or outpatient settings when patients or visitors have become emotional and hostility is becoming a risk for violent confrontation.

According to Jacqueline Bradley, UF Health Shands Security field training officer, “When we are dispatched to an area in response to a threat, we go as a team. Most of the time when people see a group of officers, that alone can defuse the tense situation. Sometimes it does not. We try to de-escalate by talking to the person and asking them, ‘What’s wrong. How can I help you? How did this happen? How did you get to this point? What can we do to solve all of this?’ We defuse it.”

She added, “It isn’t very often that de-escalation does not work. And, when it doesn’t, we take our direction from the medical staff.”

Bradley’s colleague Sean Wilson, UF Health Shands Security officer, added, “Nobody wants to go ‘hands-on’ with somebody. A true security officer doesn’t want to do that. If you’re being security-minded, what you want to do is deescalate, de-escalate, de-escalate. The training that I’ve had in de-escalation, all of the hours and situations I’ve been put through, I feel confident every time I’m called upon to help. All of us do.”

Rachel Rivera joined the Strategic Communications team as a communications coordinator in 2017. She develops and rolls out diverse communications plans for a variety of clients throughout the organization, and creates a broad array of multimedia material to advance strategic corporate goals. She also serves on the UF Health Communications media on-call team. Prior to her position on the strategic communications team, Rachel served as a marketing assistant, helping develop communications and marketing material for the department of medicine. She started her career at UF Health as a program assistant in the department of community health and family medicine. Rachel graduated from the University of Florida with a B.S. in advertising and a concentration in psychology.

THE IMPORTANCE OF MEDICATION RECONCILIATION 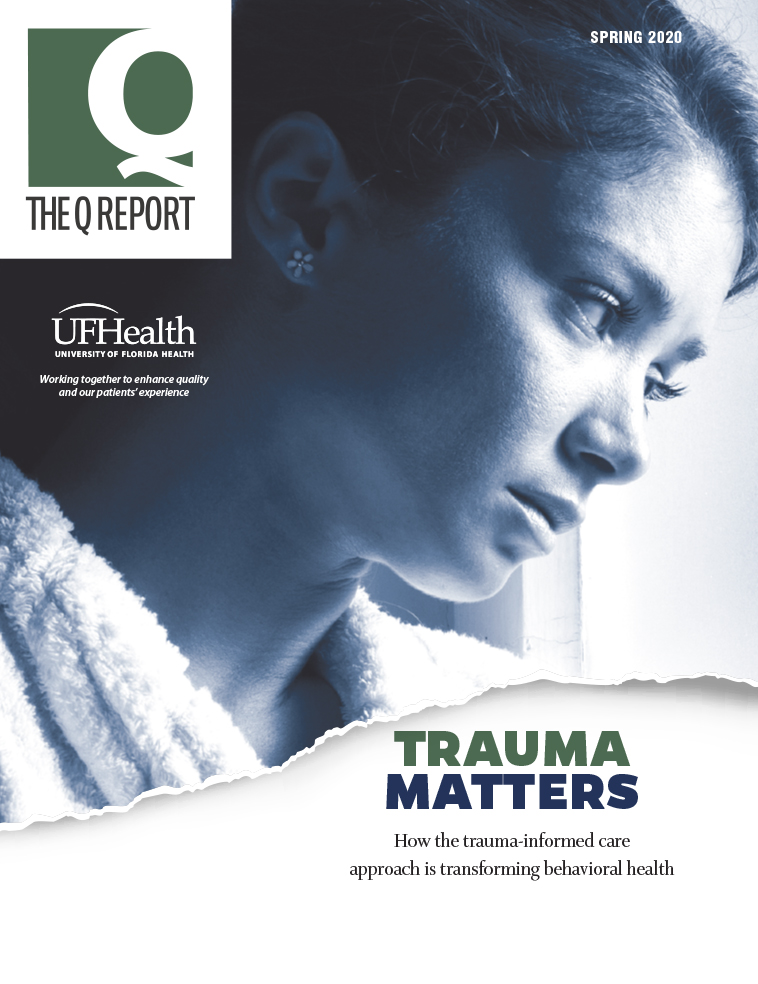